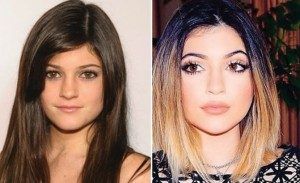 There is a difference between rejuvenation and completely transforming your face. Like many celebrities making headlines lately, one change in your face can make you look completely different. Take Kylie Jenner for instance. While she has reportedly rejected claims that she has received lip augmentation, there is no denying that her lips are much more full now than they were five years ago. Many cosmetic physicians agree that she has definitely received some sort of lip augmentation. However, in an interview with US Magazine, she implies that her larger lips are the result of her getting older stating, “You guys have watched me grow up since i was nine. My face is going to get different . . . I’m not against surgery. I’d never say no, but I don’t desire it right now.”

No. They may get smaller with age, but not grow. As an adolescent reaches puberty, their lips may widen to match the growth of their jawbone, but the tissue will often soften and recede with age.  Which is why rejuvenation of the lips is so popular with those in their middle ages. There are quite a few popular lip enhancement procedures, one of which is an injectable filler, which include Juvéderm and Restylane. Using a very small needle, these fillers can be injected directly into the lips to give volume, or around the lip to fill in wrinkles. It’s very likely that little Kardashian/Jenner received such treatments.

2 Responses to Can Lips Grow?